PITTSBURGH, PA - JANUARY 03: Cleveland Browns quarterback Baker Mayfield (6) looks on during the game against the Cleveland Browns and the Pittsburgh Steelers on January 03, 2022 at Heinz Field in Pittsburgh, PA. (Photo by Mark Alberti/Icon Sportswire)

The media and Cleveland Browns fans haven’t heard much from Baker Mayfield since the Browns traded for Deshaun Watson earlier this year. Baker Mayfield has finally broken his silence on a potential reconciliation with the Browns.

During a youth football camp in Norman, Oklahoma Tuesday, Baker Mayfield was asked if he could return to Cleveland in the event of a Deshaun Watson suspension. Baker Mayfield also said: “No. I think for that to happen there would have to be some reaching out. But we’re ready to move on, I think, on both sides,” via Carey Murdock of SoonerScoop.com. Mayfield is also offered the following: “it’s been pretty obvious the mutual decision on both sides is to move on.”

The comments come on the day Deshaun Watson’s disciplinary hearings with the NFL begin. It sounds as though Mayfield would possibly consider returning to Cleveland if the Browns reached out but insinuated that it hasn’t happened and that he feels it is unlikely.

Mayfield was also questioned about the lack of trade thus far. Baker says that he “got frustrated with it not happening before minicamp and all those things,” which will surely play a role in his preparation for the upcoming season on his next team. 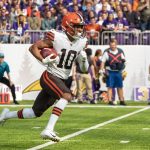 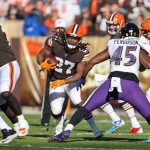