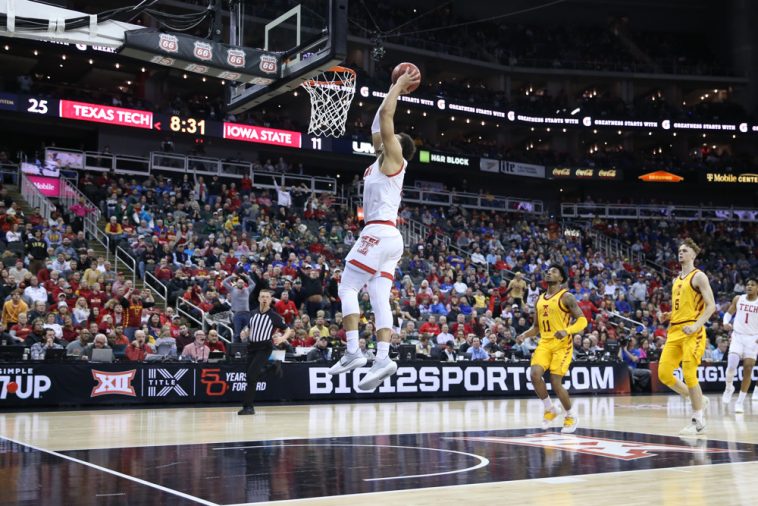 KANSAS CITY, MO - MARCH 10: Texas Tech Red Raiders forward Marcus Santos-Silva (14) goes up for the breakaway dunk in the first half of a Big 12 Tournament quarterfinal game between the Iowa State Cyclones and the Texas Tech Red Raiders on Mar 10, 2022 at T-Mobile Arena in Kansas City, MO. (Photo by Scott Winters/Icon Sportswire)

C/G – Big body boy who has good technique and strength. Better run blocker than pass blocker but not a weakness, nothing flashy with him. Plays with a mean streak.

OT/G/C – Broke through as a freshman to start at center, though he has played right tackle mostly. Is a good road grader, however, his pass blocking needs some work. Took most of his snaps at right tackle, most likely a guard. Brings versatility.

After putting impressive tape together in DII (Notre Dame College OHIO), he transferred up to Division 1. He was asked to block a lot more and he did a good job. Don’t let his 9 receptions fool you. He has soft hands and is an aggressive ball tracker. His issues came with release off the line and technique. Most of his issues can be coached up and I think he has a high ceiling. Don’t be surprised to see him actually playing next year.

With neither of these guys playing college football, it’s hard to give you a scouting report. Both guys are former basketball players looking to make that switch to tight end. Basketball players in general are better athletes, but this can be a hard transition. It should be fun watching their progression moving forward. Keep in mind before we assume they can’t make the transition, there is future Hall of Famer Antonio Gates who made this same transition and was also undrafted.

Harris is a slot receiver with good hands. Possesses good speed, but has better lateral movement. Runs good routes, gets open in space and sits there. In fact, in most cases when the play broke down and their QB was on the run looking to move the chains, Harris was his guy, especially on 3rd and 4th downs. His best skills are returning punts and kicks and has scored from rushing the ball coming out of motion and reverses.

Has elite footwork and balance. Dangerous with the ball in his hands. Does his best work cutting across the field into space. Got his most work catching screens and working the underneath routes. He is a threat to score with his speed and has big playmaker ability. The production didn’t match the talent and that’s why he is a UDFA.

This is a true outside receiver who possesses the speed and hands to be a vertical threat at the next level. Weston put up big numbers in college (37 rec., 883 yards, and 5 TDS), and tested very well at the combine (4.42 in the 40, broad jump of 11′ 3″ and 20 reps on the bench). He’s a little raw and rough around the edges but with the right coaching and grooming he has the best chance of the UDFA’s to make the 53-man roster and has the tape to show you why.

Not a huge arm or the “zing” you want in a pro-quarterback. He does however make smart plays while staying poised. Has good ball placement, decent accuracy, and is a dual-threat with good speed/agility. His size is his biggest downfall. Not only is he short, but he is also thin as well. 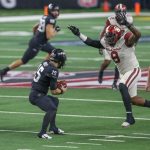