CHARLOTTE, NC - SEPTEMBER 11: Cleveland Browns kicker Cade York (3) shows his kick is good to win the game during an NFL football game between the Cleveland Browns and the Carolina Panthers on September 11, 2022 at Bank of America Stadium in Charlotte, N.C. (Photo by John Byrum/Icon Sportswire)

Now that the Cleveland Browns have finally found a kicker in 2022 4th-round-pick Cade York, we should get to know him.  Before we do that though, allow me to set the scene.  In the past few years, the Browns’ kicking room has resembled a “Lazy Susan,” making important kicks seem more like on-field auditions.  But, in the opening game of the 2022 season, York went a perfect 4/4 in field goals, finishing with a 58-yard game-winner over the Baker Mayfield led Panthers, which earned him the AFC Special Teams Player of the Week.

Prior to York’s kick, the Browns had not won a season opener since 2004.  That 2004 win was actually the only season opener the Browns had ever won since coming back to Cleveland in 1999. Thereafter, the Browns’ official Twitter account tweeted, “1-0”, which was the first time the account had been able to because Twitter was invented in 2006.  So, yeah, York’s kick is a big deal.

Cade York attended Prosper High School in Texas where he played football and, surprise surprise, soccer.  York was highlighted at The Kohl’s Kicking Camp, where he graded out as a 5-star recruit as both a kicker and a punter.  York set himself apart with distance and hang time and scouts at the camp believed his height on field goals was the best in the country,  something everyone witnessed in Sunday’s game-winning kick.

York was highly recruited and had a successful collegiate career with the LSU Tigers.  During York’s time with LSU, he made 81.8% of his field goals and 97.6% of his extra points, earning himself Second-Team All-SEC twice, First-Team All-SEC, Second-Team All-American, and The National Championship in 2020.

During the offseason, we got to see numerous videos of York bombing 50, 60, and 70-yard kicks.   According to Pat McAfee, “Cade York murders the ball”.  We all knew he had world-class talent.  But, I know I wasn’t alone in being weary of how this power and accuracy might translate to a real game.

Now, most of that anxiety and weariness has evaporated.  Granted it was only the first game of the season and, more importantly, the first game of York’s Hall of Fame career, but I believe we can all breathe a sigh of relief.  We got a guy. 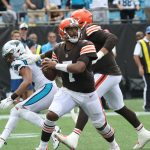 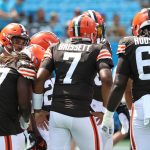