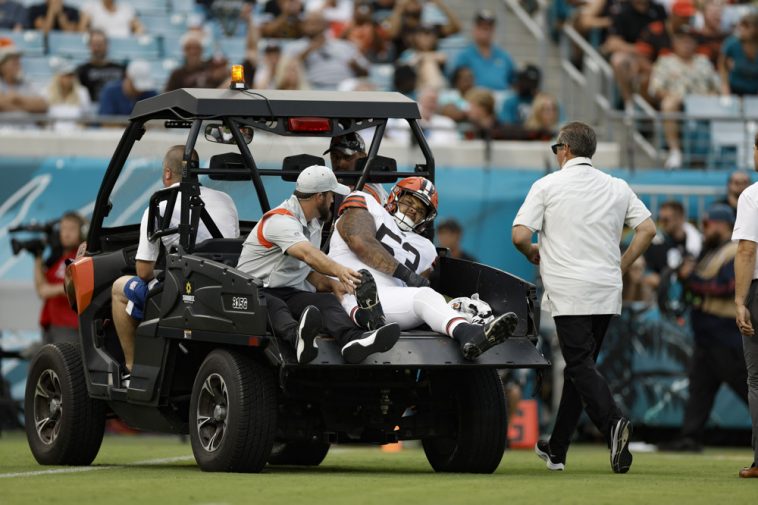 JACKSONVILLE, FL - AUGUST 12: Cleveland Browns center Nick Harris (53) is carted off the field during the game between the Cleveland Browns and the Jacksonville Jaguars on August 12, 2022 at TIAA Bank Field in Jacksonville, Fl. (Photo by David Rosenblum/Icon Sportswire)

The Cleveland Browns’ starting center Nick Harris suffered a knee injury and was carted off of the field in the first 16 seconds of last night’s preseason opener in Jacksonville.  Harris will ‘likely’ require season-ending surgery but the information is still being gathered,  According to Browns’ Head Coach Kevin Stefanski during a press conference held Saturday morning.

In the play, Harris was trying to stymie the power rush of Jaguars’ tackle DaVon Hamilton when he hopped back for a better position and suffered the injury.

Harris, a 6’1” 293 lb. center, was praised for his ability to move and pull, especially in the run game.  His abilities are well suited for the zone-run scheme that the Browns employ under Stefanski, which makes an already disappointing injury that much worse.

Ethan Pocic, a veteran entering his sixth year, took the rest of the snaps with the ones.  Stefanski declined to comment on whether the team would reach out to ex-Browns’ center JC Tretter, who was released this past off-season.  But, he added that “Ethan did a nice job and has done a nice job since April,” when the team acquired him.  And, he is “excited about what Pocic can bring to the table.”

Considering Pocic’s 6’6” 320 lb. frame, Stefanski will have to retool some of the offensive schemes and blocking assignments moving forward.  “We will play to our player’s strengths. … We are going to ask Ethan to play like Ethan and not play like somebody else.”

The Browns will host the Philadelphia Eagles in their next preseason game on August 1, at 1:00 PM. 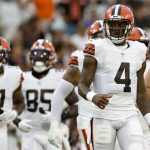