CHICAGO, IL - DECEMBER 13: Houston Texans quarterback Deshaun Watson (4) looks on in action during a game between the Chicago Bears and the Houston Texans on December 13, 2020, at Soldier Field in Chicago, IL. (Photo by Robin Alam/Icon Sportswire)

Cleveland Browns quarterback Deshaun Watson began meeting with league investigators Monday, May 16, in Houston, according to Orange and Brown Report and 247Sports’ Brad Stainbrook. The meeting is in relation to the NFL’s investigation into the 22 claims of sexual misconduct against Watson.

The meeting is the first step in the NFL’s investigation into whether or not Watson violated the league’s Personal Conduct Policy. Under the 2020 Collective Bargaining Agreement, a Disciplinary Officer will determine the length of the suspension, if a suspension at all is warranted against a player. The Disciplinary Officer is jointly appointed by the NFL and NFLPA and is seen as a neutral third-party arbiter that would be able to hand out fairer punishments.

Stainbrook’s report, which came out Monday afternoon, was verified May 17 by ESPN’s Ed Werder.

The NFL has previously lobbied for suspensions under the league’s personal conduct policy before civil cases were completed. In 2010, the NFL suspended Pittsburgh Steelers quarterback Ben Roethlisberger for six games for violating the NFL’s Personal Conduct Policy in relation to an incident where a 20-year-old Georgia college student accused Roethlisberger of sexual assault. Roethlisberger would go on to settle the case two years later in January 2012.

Regardless of the status of the investigation, Watson continues to participate in the Browns’ offseason programming. 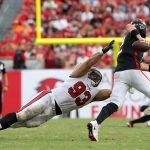