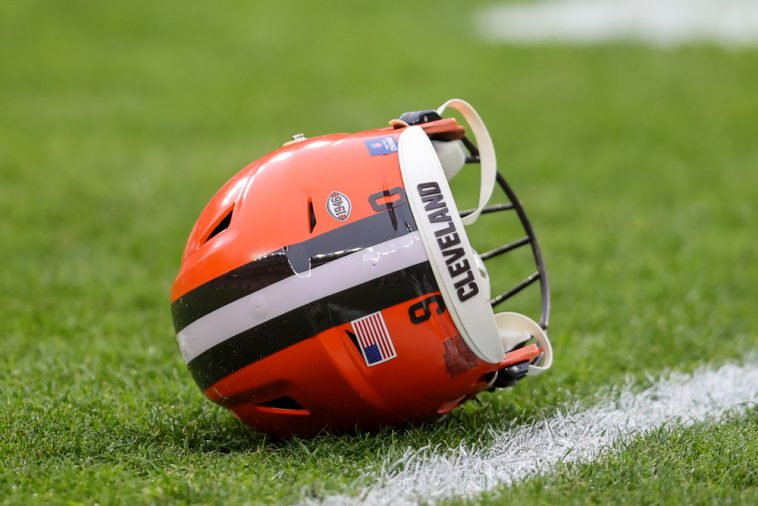 CLEVELAND, OH - JANUARY 09: A Cleveland Browns helmet on field prior to the National Football League game between the Cincinnati Bengals and Cleveland Browns on January 9, 2022, at FirstEnergy Stadium in Cleveland, OH. (Photo by Frank Jansky/Icon Sportswire)

Being a fan of the Cleveland Browns isn’t easy.  From heartbreak to the lack of a Super Bowl appearance, to the team leaving Cleveland, the franchise has been a source of heartache for its fans.  The most recent and ongoing round is wrapped around QB Deshaun Watson.  However, even before the Watson deal, the fan base was in serious turmoil.

This turmoil stemmed from one draft pick, the number one pick of the 2018 draft, Baker Mayfield.  The cries of ‘why’ and ‘how’ had the Browns seemingly thrown away the number one pick, were also joined by the cheers of the new savior for the team by one simple quote. From draft day forward, the seeds were sown for the future of Browns fandom becoming fractious in regards to Mayfield.

“If anybody’s going to turn that franchise around, it would be me…They have the right pieces, they just need one guy at quarterback to make the difference.” – Baker Mayfield NFL Combine Press Conference

Browns fans wouldn’t have to wait long to see Mayfield take the field. In week three of the 2018 season, starting QB Tyrod Taylor was injured as the Browns were down 14-0, clearing the way for Mayfield to take the reins.  In a stunning turn of events, Mayfield leads the Browns to victory, snapping a nineteen-game losing streak.  He would lead the team to a surprising 7-8-1 season, with hope and expectations at all-time highs for the 2019 season. Mayfield was the way forward, the new messiah was delivering, while the questioning crowd was very muted. However, the 2019 season would bring reality crashing back down on top of Browns fans.

With the addition of Odell Beckham Jr., new head coach Freddie Kitchens and a tidal wave of hope in the off-season, this set fans up for what should have been an amazing year.  What was delivered though, was a stark rebuttal of all of the machinations about the future as the Browns went 6-10.  Where should blame be assigned? Coaching? QB? Scheme? Offense? Defense? From this mess, three distinct sections of the fan base took shape.

The first was the most common, and still common today, the regular Browns fan. They realize the Browns are a football team with issues that need resolving.  They see the team as a sum of the parts, not reliant simply on one player to determine the fate of the team.  Loving the team, having a favorite player, and hoping for a winning season is the watchword for this group.

Next came what would come to be called the ‘Baker Bros’.  This group, while still wanting overall Browns’ success, ascribed to the idea that Mayfield could do no wrong.  Baker was simply a victim of the system, bad coaching, and occasionally made mistakes, but those could be worked on.  Mayfield being the way forward guided this group.

As with all human endeavors, the ‘Never Baker’ group emerged in direct opposition to the Baker Bros.  Mayfield couldn’t do anything right, he was too short, and exclusively blamed him for every aspect of the Brown’s losses.  To this group, there was no value in Mayfield, he shouldn’t be a starting QB in the NFL, and a real QB would be much better.  Anyone but Baker was their watchword.

When the 2020 season came around, these groups were well defined and would become more so as the season progressed.  The regulars watched as Stefanski took the helm, and had an absolutely amazing season resulting in a playoff birth.  The Never Bakers criticized every minute detail of Mayfield’s season, insisting still that the season was a fluke.  The Baker Bros were over the moon with what they viewed as continuing stellar performances.  The Browns were back, Baker wasn’t our guy, and our franchise QB was set.  Going 11-5 for 2020 was to be at a minimum, our future in football.

With 2021 came more dashed expectations.  Injuries, misfires, and losses started staking up, and the three camps were more divided than ever.  That was until the news about Deshaun Watson potentially being a suitor for the Browns broke.  That news further broke the fan base apart, resulting in a much deeper rift.  This one is based on the morality of supporting a team who would pursue a player with numerous, and serious allegations of sexual misconduct.

This rift is so irreparable that there are fans both leaving and joining the fan base. The Never Bakers gladly cheer Mayfield’s imminent departure and the arrival of a ‘true’ QB1.  The Baker Bros wanted a healthy Baker to ball out, and earn that next contract, but will not see that this year. The regular fans are at a junction of trying to separate the alleged off-field actions of Watson while realizing that if they could separate football from off-field, it would be an upgrade from Mayfield.

Browns fans have always wanted the team to win.  They were willing to be fans of a team that didn’t exist except on paper and to deal with years of floundering.  After going 1-15 and 0-16 in back-to-back seasons, hitting 7-8-1 was a miracle. Then two years later to make the playoffs, it was hope beyond hope, that the Browns finally had things sorted.

The Browns have placed at the feet of fans their desire to win at all costs.  The best available QB, but his baggage in tow.  An injured, scorned Mayfield who was signed to his fifth-year deal, who is capable of getting the team to the playoffs.  A perceived fight between morality and winning with the fans caught in the crosshairs left to figure out.  Being a fan of the Cleveland Browns isn’t easy. 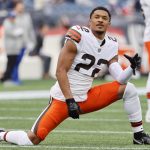 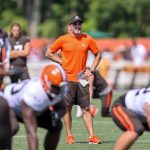