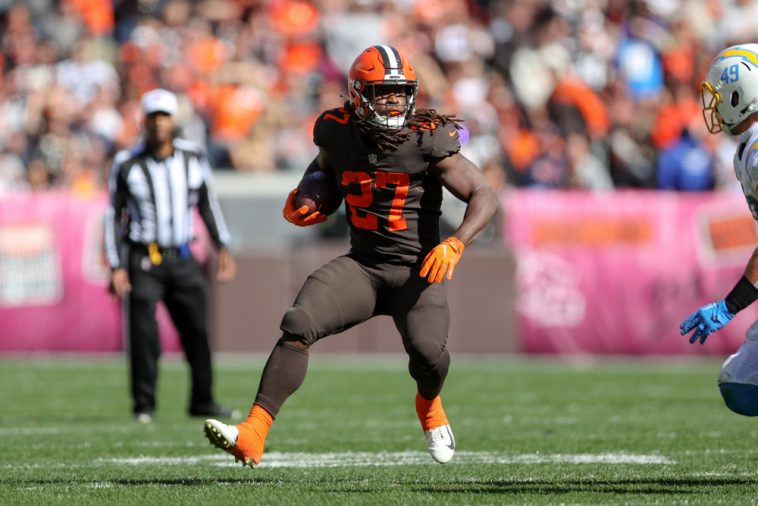 CLEVELAND, OH - OCTOBER 09: Cleveland Browns running back Kareem Hunt (27) carries the football during the second quarter of the National Football League game between the Los Angeles Chargers and Cleveland Browns on October 9, 2022, at FirstEnergy Stadium in Cleveland, OH. (Photo by Frank Jansky/Icon Sportswire)

There’s almost a zero percent chance that Hunt is re-signed for the 2023 season and beyond.

Kareem Hunt is no doubt a valuable part of the Cleveland backfield when healthy, but going forward, the Browns’ financial situation is going to be extremely tight. This is mostly due to Deshaun Watson’s massive contract. The Browns are only going to be able to extend players that are absolutely crucial to the team’s immediate success such as locked-in starters, or guys that are guaranteed rotational snaps at key positions.

Despite Kareem Hunt still being incredibly talented, this Cleveland Browns offense has undoubtedly changed. With Amari Cooper playing like the star NFL wide receiver that he always is, and David Njoku stepping up in a huge way, Kareem Hunt’s value to this team as a receiver out of the backfield is now dwindling.

An offer amount that might work for the Browns could be around $4-$5 million/year, but his true market value is probably closer to $7 Million. I truly believe that the Browns will offer Hunt some sort of “team-friendly” deal, but I don’t realistically think that it will be enough to keep his talents in Cleveland.

Cleveland’s internal game of “Would You Rather”.

Okay everyone, put yourself in Andrew Berry’s shoes.

Would you rather have Kareem Hunt on the roster for the rest of this “lost” season with a very slim chance of being extended, or trade him while you still can for an extra 3rd or 4th-round pick in the 2023 NFL Draft?

Yes, it’s hard to envision this Cleveland backfield without Hunt, but this is the current conundrum that the Browns are dealing with. If you take all of the “fandom” and “hometown infatuation” out of it, I think we all know what the outcome might be here.

If the trade does happen though, from a schematic standpoint, Cleveland should be fine with Jerome Ford going forward. He was extremely impressive throughout the preseason playing in a similar role as Hunt, and would be much more cost-effective for the team.